If you're new to Mesos

See the getting started page for more information about downloading, building, and deploying Mesos.

If you'd like to get involved or you're looking for support

It assumed that readers of this document are familiar with the contents of the Mesos fetcher user guide. The present document makes direct references to notions defined in the former.

How the fetcher cache works

In this section we look deeper into the implementation of design goals #1, #2, #3. The others are sufficiently covered in the user guide.

All decision making “intelligence” is situated in the fetcher process and the mesos-fetcher program is a rather simple helper program. Except for cache files, there is no persistent state at all in the entire fetcher system. This greatly simplifies dealing with all the inherent intricacies and races involved in concurrent fetching with caching.

The mesos-fetcher program takes straight forward per-URI commands and executes these. It has three possible modes of operation for any given URI:

Besides minor complications such as archive extraction and execution rights settings, this already sums up all it does. 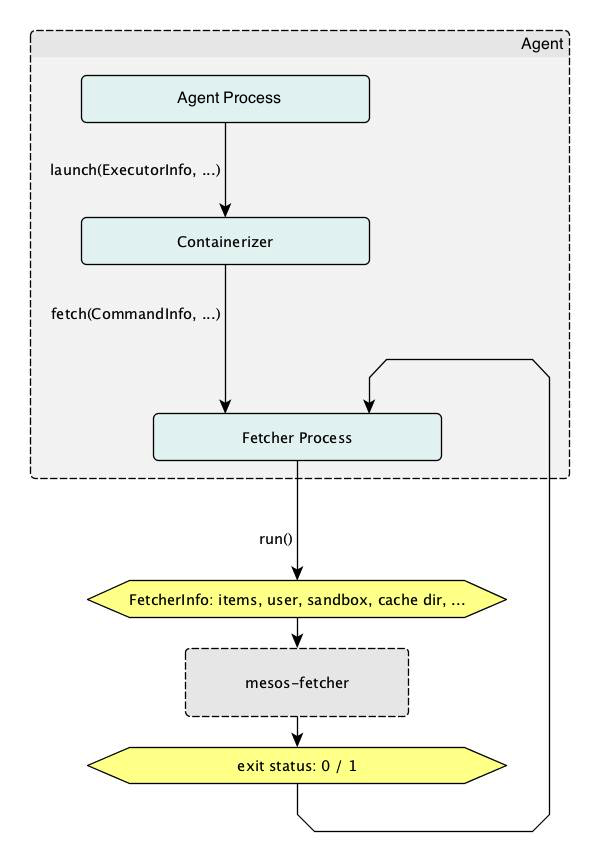 The fetcher process uses a private instance of class Cache to represent what URIs are cached, where the respective cache files are, what stage of processing they are in, and so on.

The main data structure to hold all this information is a hashmap from URI/user combinations to Cache::Entry objects, which each contain information about an individual cache file on disk. These objects are referenced by shared_ptr, because they can be addressed by multiple callbacks on behalf of concurrent fetch attempts while also being held in the hashmap.

A cache entry corresponds directly to a cache file on disk throughout the entire life time of the latter, including before and after its existence. It holds all pertinent state to inform about the phase and results of fetching the corresponding URI.

This figure illustrates the different states which a cache entry can be in.

While a cache entry is referenced it cannot be evicted by the current or any other concurrent fetch attempt in order to make space for a download of a new cache file.

The two blue states are essentially the same: no cache file exists. The two green disk states on the right are also the same.

The figure only depicts what happens from the point of view of one isolated fetch run. Any given cache entry can be referenced simultaniously by another concurrent fetch run. It must not be evicted as long as it is referenced by any fetching activity. We implement this by reference counting. Every cache entry has a reference count field that gets incremented at the beginning of its use by a fetch run and decremented at its end. The latter must happen no matter whether the run has been successful or whether there has been an error. Increments happen when:

Every increment is recorded in a list. At the very end of the fetch procedure, no matter what its outcome is, each entry in the list gets its reference count decremented.

(Currently, we are even leaving reference counts for cache entries for which we fall back to bypassing the cache untouched until the end of the fetch procedure. This may be unnecessary, but it is safe. It is also supposedly rare, because fallbacks only occur to mitigate unexpected error situations. A future version may optimize this behavior.)

As menitoned above, the fetcher process' main control flow concerns sorting out what to do with each URI presented to it in a fetch request. An overview of the ensuing control flow for a given URI is depicted in this figure.

The implementation is oriented at this control flow but its code structure cannot match it directly, because some of these branches must span multiple libprocess continuations. There are two layers of futures, one for each of these phases.

The futures for phase 1 are not shared outside one fetch run. They exclusively guard asynchronous operations for the same fetch run. Their type parameter does not really matter. But each needs to correspond to one URI and eventual fetch item somehow. Multiple variants have been proposed for this. The complexity remains about the same.

The futures for phase 2 need to be part of the cache entries, because they are shared between concurrent fetch runs.

Some time between phase 1 and 2, the fallback strategy needs to be applied where indicated: when a future from phase 1 has failed for any reason, we fall back on bypassing the cache.

Besides, everything touched in 1/a and 1/b needs to be prevented from being cache-evicted until the end. One can in principle release cache entries right after they fail, but this requires more complexity and is harder to prove correct. 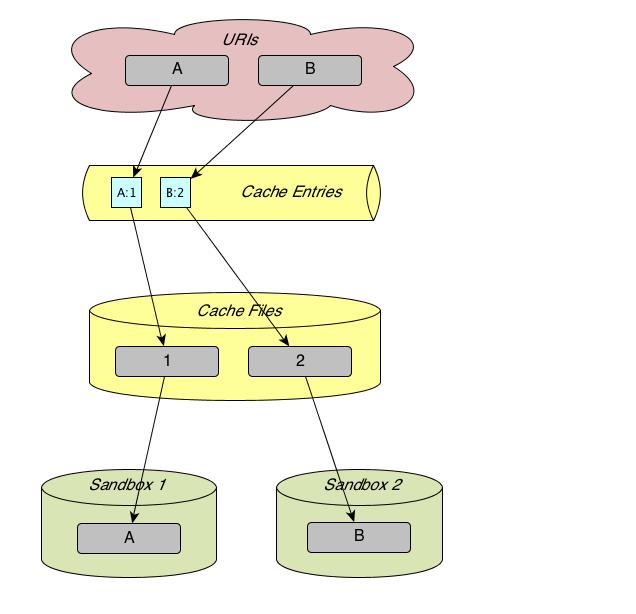 The resources named “A” and “B” have been fetched with caching into sandbox 1 and 2 below. In the course of this, two cache entries have been created and two files have been downloaded into the cache and named “1” and “2”. (Cache file names have unique names that comprise serial numbers.)

The next figure illustrates the state after fetching a different cached URI into sandbox 3, which in this case requires evicting a cache-resident file and its entry. Cache eviction removes cache entries in the order of the least recently used cache entries. Steps if “A” was fetched before “B”: 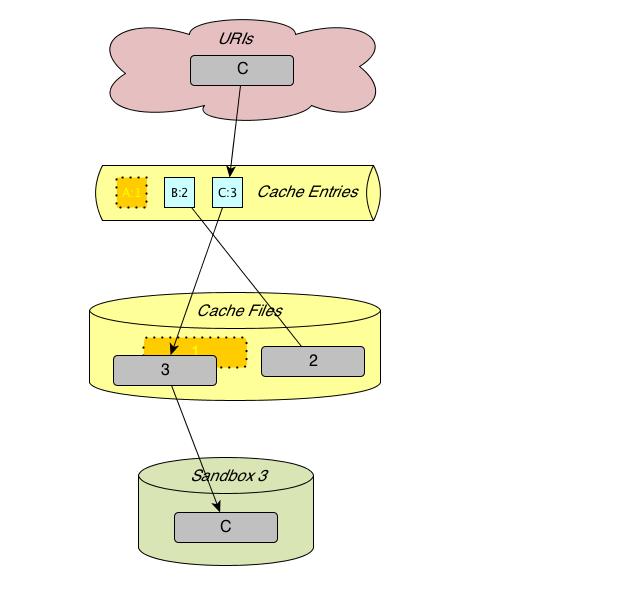 The next figure then shows what happens if the first URI is fetched once again. Here we also assume the cache being so filled up that eviction is necessary and this time the entry and file for “B” are the victims. 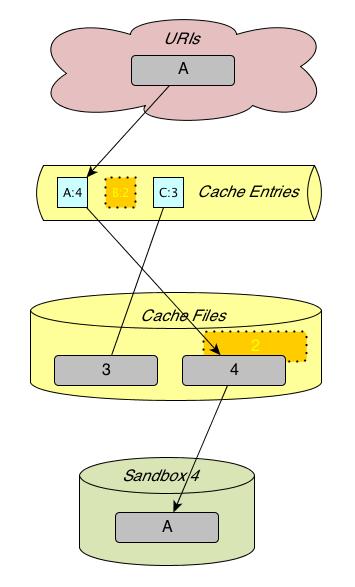