If you're new to Mesos

See the getting started page for more information about downloading, building, and deploying Mesos.

If you'd like to get involved or you're looking for support 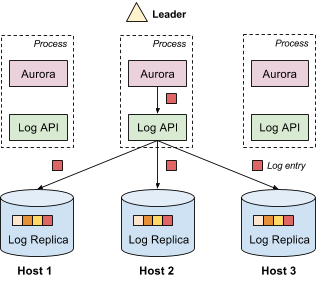 The replicated log provides append-only storage of log entries; each log entry can contain arbitrary data. The log is replicated, which means that each log entry has multiple copies in the system. Replication provides both fault tolerance and high availability. In the following example, we use Apache Aurora, a fault tolerant scheduler (i.e., framework) running on top of Mesos, to show a typical replicated log setup.

As shown above, there are multiple Aurora instances running simultaneously (for high availability), with one elected as the leader. There is a log replica on each host running Aurora. Aurora can access the replicated log through a thin library containing the log API.

Typically, the leader is the only one that appends data to the log. Each log entry is replicated and sent to all replicas in the system. Replicas are strongly consistent. In other words, all replicas agree on the value of each log entry. Because the log is replicated, when Aurora decides to failover, it does not need to copy the log from a remote host.

The replicated log is often used to allow applications to manage replicated state in a strongly consistent way. One way to do this is to store a state-mutating operation in each log entry and have all instances of the distributed application agree on the same initial state (e.g., empty state). The replicated log ensures that each application instance will observe the same sequence of log entries in the same order; as long as applying a state-mutating operation is deterministic, this ensures that all application instances will remain consistent with one another. If any instance of the application crashes, it can reconstruct the current version of the replicated state by starting at the initial state and re-applying all the logged mutations in order.

If the log grows too large, an application can write out a snapshot and then delete all the log entries that occurred before the snapshot. Using this approach, we will be exposing a distributed state abstraction in Mesos with replicated log as a backend.

Similarly, the replicated log can be used to build replicated state machines. In this scenario, each log entry contains a state machine command. Since replicas are strongly consistent, all servers will execute the same commands in the same order. 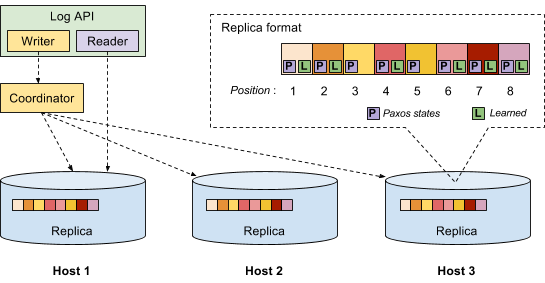 The replicated log uses the Paxos consensus algorithm to ensure that all replicas agree on every log entry’s value. It is similar to what’s described in these slides. Readers who are familiar with Paxos can skip this section.

Each replica keeps an array of log entries. The array index is the log position. Each log entry is composed of three components: the value written by the user, the associated Paxos state and a learned bit where true means this log entry’s value has been agreed. Therefore, a replica in our implementation is both an acceptor and a learner.

To append value X to the log at position p, the coordinator first broadcasts a promise request to all replicas with proposal number n, asking replicas to promise that they will not respond to any request (promise/write request) with a proposal number lower than n. We assume that n is higher than any other previously used proposal number, and will explain how we do this later.

Upon receiving promise responses from a quorum of replicas, the coordinator first checks if there exist any previously written value from those responses. The append operation cannot continue if a previously written value is found because it’s likely that a value has already been agreed on for that log entry. This is one of the key ideas in Paxos: restrict the value that can be written to ensure consistency.

One naive solution to implement a replicated log is to run a full Paxos round (promise phase and write phase) for each log entry. As discussed in the original Paxos paper, if the leader is relatively stable, Multi-Paxos can be used to eliminate the need for the promise phase for most of the append operations, resulting in improved performance.

One question remaining is how can we find out those log entries whose values have not yet been agreed. We have a very simple solution: if a replica accepts an implicit promise request, it will include its largest known log position in the response. An elected coordinator will only append log entries at positions larger than p, where p is greater than any log position seen in these responses.

Multi-Paxos has better performance if the leader is stable. The replicated log itself does not perform leader election. Instead, we rely on the user of the replicated log to choose a stable leader. For example, Aurora uses ZooKeeper to elect the leader.

As discussed above, in our implementation, each replica is both an acceptor and a learner. Treating each replica as a learner allows us to do local reads without involving other replicas. When a log entry’s value has been agreed, the coordinator will broadcast a learned message to all replicas. Once a replica receives the learned message, it will set the learned bit in the corresponding log entry, indicating the value of that log entry has been agreed. We say a log entry is “learned” if its learned bit is set. The coordinator does not have to wait for replicas' acknowledgments.

To perform a read, the log reader will directly look up the underlying local replica. If the corresponding log entry is learned, the reader can just return the value to the user. Otherwise, a full Paxos round is needed to discover the agreed value. We always make sure that the replica co-located with the elected coordinator always has all log entries learned. We achieve that by running full Paxos rounds for those unlearned log entries after the coordinator is elected.

To avoid livelock (e.g., when two coordinators completing), we inject a randomly delay between T and 2T before each retry. T has to be chosen carefully. On one hand, we want T >> broadcast time such that one coordinator usually times out and wins before others wake up. On the other hand, we want T to be as small as possible such that we can reduce the wait time. Currently, we use T = 100ms. This idea is actually borrowed from Raft.

The algorithm described above has a critical vulnerability: if a replica loses its durable state (i.e., log files) due to either disk failure or operational error, that replica may cause inconsistency in the log if it is simply restarted and re-added to the group. The operator needs to stop the application on all hosts, copy the log files from the leader’s host, and then restart the application. Note that the operator cannot copy the log files from an arbitrary replica because copying an unlearned log entry may falsely assemble a quorum for an incorrect value, leading to inconsistency.

To avoid the need for operator intervention in this situation, the Mesos replicated log includes support for auto recovery. As long as a quorum of replicas is working properly, the users of the application won’t notice any difference.

To enable auto recovery, a key insight is that a replica that loses its durable state should not be allowed to respond to requests from coordinators after restart. Otherwise, it may introduce inconsistency in the log as it could have accepted a promise/write request which it would not have accepted if its previous Paxos state had not been lost.

A replica in EMPTY status will be promoted to VOTING status if the following two conditions are met:

In the following, we discuss how we achieve these two conditions.

Since we don’t allow an empty replica (a replica in EMPTY status) to respond to requests from coordinators, that raises a question for bootstrapping because initially, each replica is empty. The replicated log provides two choices here. One choice is to use a tool (mesos-log) to explicitly initialize the log on each replica by setting the replica’s status to VOTING, but that requires an extra step when setting up an application.

Starting with Mesos 1.5.0 it is possible to perform eventually consistent reads from a non-leading VOTING log replica. This makes possible to do additional work on non-leading framework replicas, e.g. offload some reading from a leader to standbys reduce failover time by keeping in-memory storage represented by the replicated log “hot”.

To serve eventually consistent reads a replica needs to perform catch-up to recover the latest log state in a manner similar to how it is done during EMPTY replica recovery. After that the recovered positions can be replayed without fear of seeing “holes”.

A truncation can take place during the non-leading replica catch-up. The replica may try to fill the truncated position if truncation happens after the replica has recovered begin and end positions, which may lead to producing inconsistent data during log replay. In order to protect against it we use a special tombstone flag that signals to the replica that the position was truncated and begin needs to be adjusted. The replica is not blocked from truncations during or after catching-up, which means that the user may need to retry the catch-up procedure if positions that were recovered became truncated during log replay.

Currently, replicated log does not support dynamic quorum size change, also known as reconfiguration. Supporting reconfiguration would allow us more easily to add, move or swap hosts for replicas. We plan to support reconfiguration in the future.